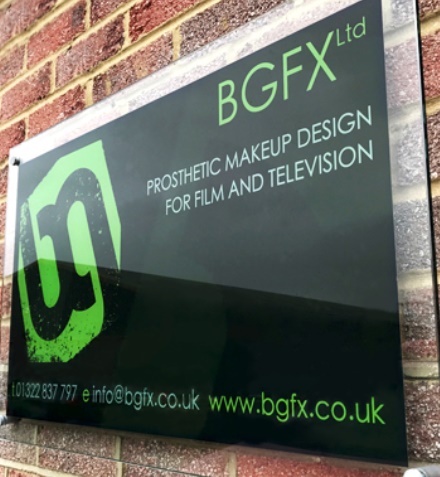 BGFX Ltd is a Makeup effects facility based in southeast London. Founded in 2010 by husband and wife team Barrie and Sarah Gower, BGFX pride themselves on offering state of the art prosthetic makeups and makeup effects for Film and Television.

Barrie began his career in the film industry in 1996 after graduating from the London College of Fashion with a HND in Specialist Make-up. His first role was at the BBC Visual Effects dept. on projects including 'Red Dwarf' and 'Silent Witness'. The following year, Barrie was employed on his first major feature film, Steven Spielberg's 'Saving Private Ryan'. Barrie has since worked for industry leading companies and individuals such as Weta Workshop and multi award winner Rick Baker. Barrie contributed towards the Academy award winning prosthetics for 'The Wolfman' (2011) and 'The Iron Lady' (2012) and has won 3 Primetime Emmy awards and a Makeup and Hair Stylist Guild award for his work on HBO's Game of Thrones.

After graduating from Teesside University with a BA (Hons) in Creative Visualisation in 2000, Sarah began work in the visual effects department of Jim Henson's Creature Shop. Her career progressed in VFX (as Sarah Micallef) by working for Framestore as VFX Coordinator and DI Producer, as a VFX Coordinator for Disney/Bruckheimer on Prince of Persia and more recently as a VFX Producer at Cinesite on projects such as X-Men First Class and Jack Ryan: Shadow Recruit. Using her knowledge and skills as a VFX Producer, she now coordinates all projects for BGFX.  Sarah has won a Primetime Emmy award and a Makeup and Hair Stylist Guild award for her work on HBO's Game of Thrones.